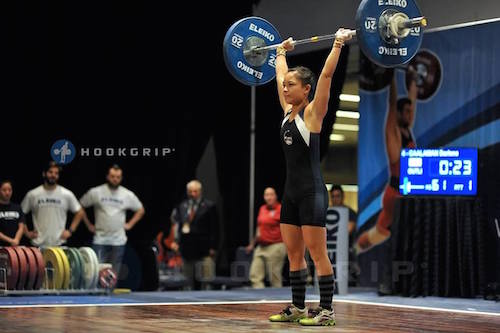 Darlene has been CrossFitting since 2008. She loves all things fitness- CrossFit, weightlifting, yoga, rock climbing, swimming, biking, running, brazilin jiu-jitsu, and about anything else you can think of. A long time fan of all things squat-related, she fell in love with olympic weightlifting. Darlene competes in the 48 kg women’s weight class in olympic weightlifting. After competing in several USAW meets, she went as far as the 2014 American Open Championship in Washington D.C. She is an inspiration in defiance for all of those who think that only big people can lift big weights. In 2015, she finally decided on getting her CrossFit L1 certification. With a penchant for physical exertion and the curiosity to learn more, she makes an excellent compliment to the coaching staff. Darlene’s favorite movements are snatch, clean and jerk, pistols, rope climbs and HSPU.